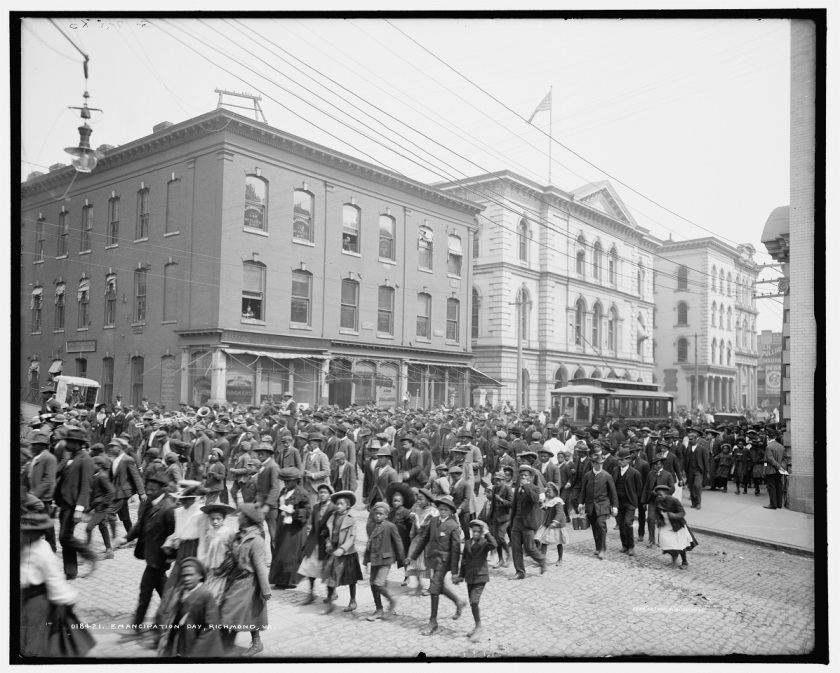 As most of us have likely heard, this week Juneteenth was officially made a federal holiday when President Joe Biden signed the Juneteenth National Independence Day Act. A portmanteau of “June” and “nineteenth,” Juneteenth commemorates the day in 1865 when Maj. Gen. Gordon Granger led a force of Union troops into Galveston, Texas and informed the enslaved people there that they were free. This was 2 and 1/2 years after the Emancipation Proclamation, which declared enslaved people in the Confederacy free, came into effect on January 1, 1863.

Many slave owners in Confederate states chose not to tell their slaves about the Emancipation Proclamation and kept right on exploiting their labor. Union soldiers were largely unable to enforce the Proclamation in Southern states until they had won the war. Texas was the last holdout of the Confederacy; so, the roughly 250,000 enslaved people there were among the last to be informed that they were free (Pruitt-Young, 2021).

Upon arrival in Galveston, Gen. Granger read out General Order No. 3 (Davis, 2020) which states:

“The people of Texas are informed that, in accordance with a proclamation from the Executive of the United States, all slaves are free. This involves an absolute equality of personal rights and rights of property between former masters and slaves, and the connection heretofore existing between them becomes that between employer and hired labor. The freedmen are advised to remain quietly at their present homes and work for wages. They are informed that they will not be allowed to collect at military posts and that they will not be supported in idleness either there or elsewhere.”

Some former slaves and their descendants traveled to Galveston annually on June 19th to celebrate the end of slavery in Texas. As freed Texans moved to other states, Juneteenth, as the day came to be known, spread to neighboring states and beyond. In 1980, Texas became the first state to recognize June 19 as a state holiday (Combs, 2021). As of today, Juneteenth is recognized in some way by all but one state.

Here are some programs to watch to learn more about and commemorate Juneteenth:

What is Juneteenth? 4 things you should know

Juneteenth Jamboree: From a Free Place to Displace

The creation of this federal holiday was a nice symbolic gesture but let us hope it was the precursor to more meaningful legislation designed to promote equality and justice in this country. As Dr. Bernice King, daughter of Martin Luther King Jr. and CEO of The King Center, noted, “We can’t forget that it’s ceremonial, holidays are points of recognition, what is needed though, is substance…There’s just so much that has to happen in our Senate to really deliver substance to the Black community” (Chowdhury et al., 2021).

The Senate has thus far refused to pass H.R.1, the For the People Act, which would make it easier to vote, increase election security, limit partisan gerrymandering, create new ethics rules for federal officeholders, and improve campaign finance transparency (Sherman, 2019).

Yet, since the 2020 presidential election, 14 states have enacted new voting laws designed to make it more difficult to vote absentee and by mail after a record number of Americans voted by mail last November (Boschma, 2021). Bills that would affect voting access have been introduced in 48 states. The majority would restrict absentee and mail-in voting, while others include provisions for tougher voter ID requirements and voter role purges.

While the House of Representatives passed H. R. 1280, the George Floyd Justice in Policing Act of 2021, the bill has not received a vote in the Senate. The goal of the legislation is to combat police misconduct and use of excessive force, improve police training, prohibit discriminatory profiling, and invest in community programs designed to improve policing (Gomez, 2021).

The John Lewis Voting Rights Advancement Act, H.R.4 has languished in Congress for years and has yet to be introduced in this session of Congress. The bill would restore a key provision of the Voting Rights Act of 1965 struck down by the Supreme Court in 2013, which required certain jurisdictions with a history of racial discrimination in voting to receive preclearance from the federal government before making changes to their voting rules (Segers, 2021).

While we celebrate Juneteenth, let us keep pushing our legislators to pass the bills that would protect voting rights and could have a substantive, positive impact in African American communities across the country. As President Biden stated during a ceremony to mark the signing of the legislation into law, “We can’t rest until the promise of equality is fulfilled for every one of us in every corner of this nation. That to me is the meaning of Juneteenth” (Vazquez, 2021).

Featured Image: A Juneteenth celebration in Richmond, Virginia, c. 1905. Image courtesy of the Library of Congress.

Vinopal, Courtney. “What Is Juneteenth? 4 Things You Should Know.” PBS NewsHour, June 18, 2020. https://www.pbs.org/newshour/nation/watch-live-what-is-juneteenth-your-questions-answered.