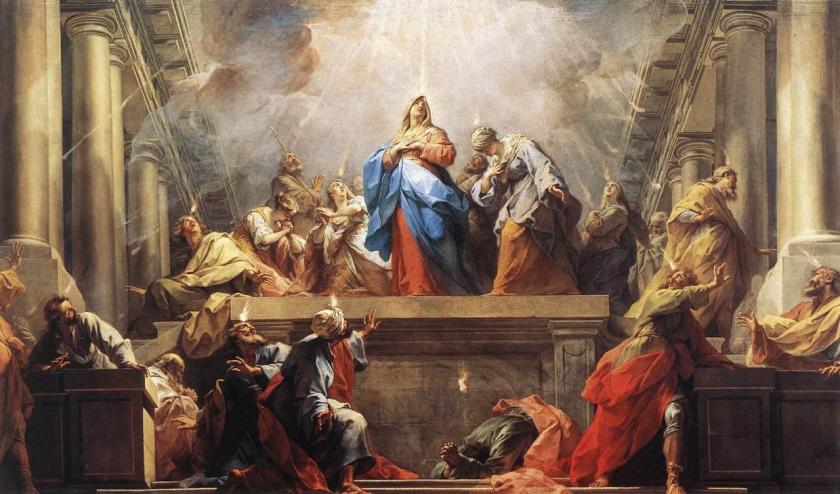 Listen to the reflection here: http://www.stjohnsnewhaven.org/resources/

Hello, St. John’s family. In this meditation, I want to think about the image of the Holy Spirit as fire. This is something I’ve been dwelling on for the past few years, and I’ve gotten to see several different sides of this image that I’m excited to share with y’all.

In our Acts reading this Sunday, we saw that when the disciples were together on Pentecost, “divided tongues, as of fire, appeared among them, and a tongue rested on each of them. And they were filled with the Holy Spirit.”1 Why does the Spirit come among the disciples symbolized by fire?

Well, to start with, fire burns. It is a threat: when we get too close to a real fire, we get hurt, and there is a sense in which this is true of the Holy Spirit as well. In his poem “Little Gidding,” T. S. Eliot describes Pentecost like this: “The dove descending breaks the air/ With flame of incandescent terror/ Of which the tongues declare/ The one discharge from sin and error./ The only hope, or else despair/ Lies in the choice of pyre or pyre–/ To be redeemed from fire by fire.” This is an intense and frightening image. The theme of God approaching His people like a fire appears throughout Scripture, but God is specifically described as refiner’s fire over and over. He’s a fire that purifies us as gold and silver are purified and their dross burned away. I confess I have dwelt too deeply on the intimidating parts of this image over the past few years.

The truth that God draws near as a refining fire is intimidating, because my heart is deeply, deeply sinful; no part of my being is free from dross, and there are evens sins that I’ve chosen so often that they’ve become part of my very identity. So sanctification often feels like having parts of myself burned away, and the more that gets burned off, the more I can see in myself that still needs to go. Sanctification is hard, and it’s scary, and sometimes it feels like being thrown into the middle of a fire and having to grit your teeth and endure the burning instead of running away.

But fire, especially the fire of the Holy Spirit, doesn’t just cause suffering. As Aang and Zuko learn in the show Avatar: The Last Airbender, which has just come onto Netflix, fire is life and not just destruction. God even subverts the nature of fire in Scripture; in Exodus, when God appears to Moses to declare His name and bring His people out of Egypt to worship Him in covenant community, He appears as “a flame of fire in the midst of a bush. The bush was burning, and yet it was not consumed.”2 I think we see the same thing at Pentecost, where the tongues of fire on the heads of the disciples lead them to declare God’s deeds of power and the salvation He wrought in Christ, in languages that all people can understand. This is the same Spirit of power we have in our midst now.

This doesn’t lessen the truth of the suffering that comes when our dross is burned away, but it contextualizes that suffering within a story of such abundant joy that there’s no way it can’t be worth it. The gifts of the Holy Spirit are marvelous and powerful things, and drawing near to God might burn off parts of ourselves, but those are parts that need to go in order for us to worship Christ and declare His truth as new creations. The Spirit can and will purify us through affliction—most of the disciples who received the Holy Spirit at Pentecost became martyrs—but this affliction is worth facing because, as Hebrews says, our confidence has a great reward. As St. John’s has been experiencing an outpouring of the Holy Spirit in prayer during this time of quarantine, I want to exhort us all to be aware that trials and challenges will come as we confront our own sin and the sin in the world around us, through the power of the Spirit. But in these sanctifying trials, let us not look to the things we are losing, but earnestly desire the reward.